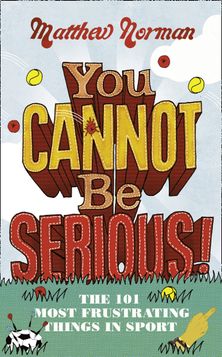 You Cannot Be Serious!: The 101 Most Infuriating Things in Sport

In an Orwellian Ministry of Sport, what ultimate terror would await you in Room 101? Would Tim Henman’s choking crush the spirit sooner than the glacial detachment of his parents? Would the philandering of an Ashley Cole or a Will Carling break you faster than the pipe-smoking prissiness of bowlsman David Bryant or the obese bare-chested Geordie football fan in winter? Would it be Neville Neville’s unrepentant siring of Phil that cracked you, or the Charidee Fun Runner doing the marathon in the guise of Spiderman? The nasally overexcited John Motson or the mellifluously smug Peter Alliss? How do you rank the self-pitying lunacy of Arsène Wenger against Alex Ferguson’s psychotic ranting? Or the shameful innumeracy of referee Graham Poll against umpire Billy Bowden’s sinister crook-finger?

Counting down the greatest torments in sport from 101 to number one has been a filthy job. But someone had to do it.

Reviews of You Cannot Be Serious!: The 101 Most Infuriating Things in Sport