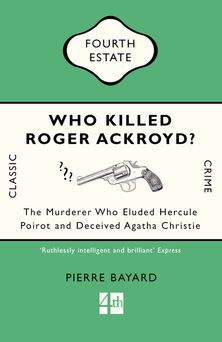 An inspired blend of criticism, detection and good old-fashioned sleuthing.

When Agatha Christie published her masterpiece The Murder of Roger Ackroyd she confounded the conventions of the detective story by making her narrator, Dr Sheppard, the killer: every event in the novel is seen through Sheppard’s eyes. But when faced by Hercule Poirot in a typically grandstanding finale, Sheppard reacts to Poirot’s solution of the crime with astonishment, and with good cause: the punctilious Beligian detective’s explanation is as motiveless as it is impractical. This is the starting point in Pierre Bayard’s clever, affectionate tribute to the Queen of Crime. Bayard asks the question: might Poirot have got it wrong? And if so, why might he have been mistaken? Did Christie herself understand the ending of her own book or was she too being manipulated by her narrator? In a display of literary intrigue worthy of Umberto Eco or John Sutherland, Bayard plots his own solution, faithfully following the devices of Agatha Christie’s original in this deft, smart homage. And, in his own denoument he finally answers the question first posed by Agatha Christie seventy-six years ago: who really killed Roger Ackroyd?

Reviews of Who Killed Roger Ackroyd?: The Murderer Who Eluded Hercule Poirot and Deceived Agatha Christie