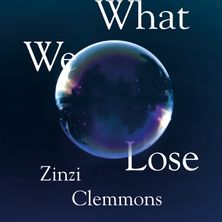 Thandi is American, but not as American as some of her friends. She is South African, but South Africa terrifies her. She is a black woman with light skin.

In exquisite vignettes of wry warmth and extraordinary emotional power, What We Lose tells Thandi’s story. Both raw and artful, minimal yet rich, it is an intimate portrait of love and loss, and a fierce meditation on race, sex, identity, and staying alive.