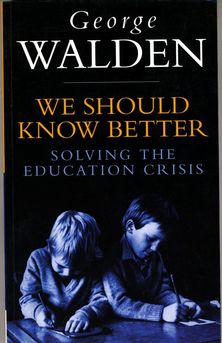 We Should Know Better: Solving the education crisis

In this passionate and profound book, a former Education Minister confronts the education policies of the two major parties and concludes that they are both evading the real issue: namely the vast and growing gulf between public and private education, between privilege and deprivation. Walden concludes that unless we radically alter the balance between these two sectors not only will the class bias of our society continue but Britain will inevitably end up as ‘The Thick Man of Europe’ . This former diplomat uses his experience of foreign models of education to propose a complete shake-up. He has the backing of all former 120 direct grant grammar schools who have pledged their re-entry into the state sector if his plans were adopted.

Reviews of We Should Know Better: Solving the education crisis