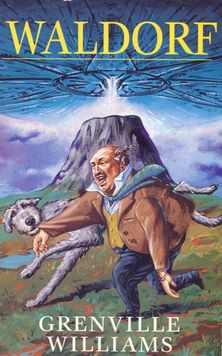 Comic fantasy about a very buttoned up retired army officer who has his brain swapped by invading aliens with that of his dopey Irish wolfhound.

Captain Reginald Bagshott-Hawkes (Rtd.) – and now running an insurance company – is out walking his Irish wolfhound Waldorf when they are captured by an alien spacecraft. Reggie’s brain is taken out and placed inside Waldorf’s head, and Waldorf’s brain is put into Reggie’s. Daft Jim, the village idiot (who had also had his brain substituted and mystified everyone with his sudden intelligence) discovers that a rendezvous has been arranged to have the brains swapped back in two weeks time – otherwise Reggie and Waldorf will be in this predicament for the rest of their lives. Everyone thinks Waldorf’s mad because he won’t eat dog food anymore. And Reggie starts barking and biting people.