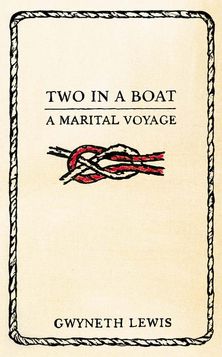 Two in a Boat: A Marital Voyage

In her forties and recovering from a long battle against depression and alcoholism, Welsh poet Gwyneth Lewis decided to trade in her landlubber life – a nice house in Cardiff and a sensible job at the BBC – for life aboard a small yacht with her husband Leighton, a former bosun with the Merchant Navy and now in his mid-sixties.

“We bought our first sailing boat by accident… She was a twenty-three-foot Intro class racer called Nitro, had a yellow hull and was totally unsuitable for beginners, so we bought her and started to learn how to sail in the Bristol Channel. Not long afterwards we were talking about renting out the house and sailing around the world.”

After buying a yacht – Jameeleh – and teaching themselves to sail it (a process not without its fair share of disasters, from psychotic seas off St. Govan’s Head to broken ribs off Ballycotton), Gwyneth and Leighton set out to cross the Atlantic. Unfortunately Gwyneth’s incessant seasickness and Leighton’s daily deterioration into a moody Captain Bastard were not the only catastrophes with which they had to contend. This strange, stirring and often hilarious account of their voyage is as much a beginner’s guide to sailing as it is a portrait of a marriage under the pressure of depression, both medical and meteorological.

Gwyneth Lewis’s training as a poet and film-maker lends her prose a wonderfully visual quality, and her contagious optimism in the face of inconceivable adversity – not much more could possibly have gone wrong – makes this unique book both touchingly witty and incredibly wise.

Reviews of Two in a Boat: A Marital Voyage