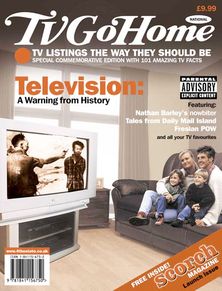 Based on Britain’s most popular comedy website, TV GO HOME is a spoof listings magazine that does for the Radio Times what The Onion did for newspapers. Savage, satirical, surreal, and frequently incredibly stupid, this book will make you laugh out loud.

TV GO HOME (http://www.tvgohome.com) is Britain’s most infamous comedy magazine – a cult spoof of both television and TV listings magazines such as the Radio Times. Its merciless, anarchic humour attracts over 150,000 readers a month – an audience that is constantly growing. And this book is that website – multiplied by eight and presented in a handy, portable paper-and-inkward edition.

Its presence, in large numbers, on a prominent shelf, will instantly render your bookshop 36 times more likely to win a trophy in a ‘Most Good Bookshop’ contest or something.

‘One of the biggest word-of-mouth internet cults of the past year… enjoy (it) now… disgusting, disturbing and very funny.’