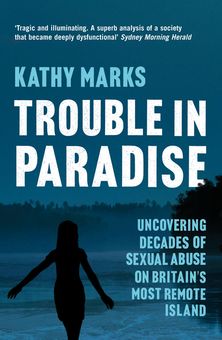 Pitcairn Island – home to the descendants of the mutineers of the Bounty – has long been thought of as a tropical paradise. Wild and remote, it is Britain’s most isolated outpost and a fantasy destination for many. But in 1999, British police, alerted by unsettling reports of a rape, descended on the island. Their investigation developed into a major enquiry which revealed that Pitcairn was the site of widespread and horrific sexual abuse instigated by the island men on girls as young as twelve. Scarcely a man on the island was untainted by the allegations, and almost none of the women had escaped, though most residents feigned ignorance, even when their own daughters were abused. Abusers included the magistrates and police officers as well as brothers and uncles. Few of the victims were able to leave the island; those who did never went back. Kathy Marks was one of only six journalists permitted to live on the island while she reported on the ensuing trial and witnessed Pitcairn’s domestic workings first-hand. In this riveting account she documents a society gone badly astray, leaving lives shattered, codes broken and a paradise truly lost. Note that it has not been possible to include the same picture content that appeared in the original print version.