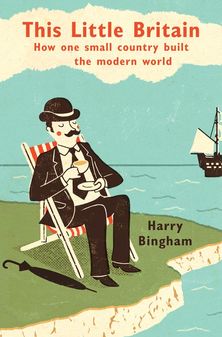 For the British, that’s an oddly difficult question. Although our national self-assessment usually notes a number of good points (we’re inventive, tolerant, and at least we’re not French), it lists a torrent of bad ones too. Our society is fragmented and degenerate. Our kids are thugs, our workers ill-educated, our public services abysmal. We drink too much. Our house prices are crazy, our politicians sleazy, our roads jammed, our football team rubbish. When the ‘Times’ invited readers to suggest new designs for the backs of British coins, one reader wrote in saying, ‘How about a couple of yobs dancing on a car bonnet or a trio of legless ladettes in the gutter?’

Is there really nothing to be proud of? British inventors have been responsible for myriad marvels we now take for granted, from the steam engine to the world wide web. British medical and public health innovations – vaccination, integrated mains sewerage, antiseptic surgery – have saved far more lives than all other medical innovations put together. And why stop there? The British empire covered a quarter of the earth’s surface but used an army smaller than that of Switzerland to exert its rule. The world speaks our language. Our scientists have won vast numbers of Nobel Prizes. The evolution of habeas corpus, trial by jury and the abolition of torture aren’t purely British in inspiration, but owe more to us than to anyone else. Our parliamentary democracy has been hugely influential in spreading ideals of liberty and representative government round the world.

If the modern world is richer, freer, more peaceful, more democratic and healthier than it was, then Britain has played a leading role in that transformation. This book is about just that. Taking a particular interest in the many things that we did first, or best, or most, or were the only ones ever to do, this focuses especially on those of our oddities that spread across the world – everything from football to the rule of law.