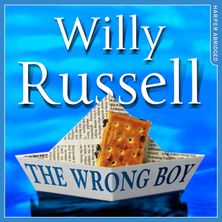 The extraordinary first novel from the internationally acclaimed playwright.

Reviews of The Wrong Boy