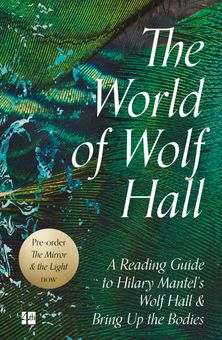 The World of Wolf Hall: A Reading Guide to Hilary Mantel’s Wolf Hall & Bring Up the Bodies

Ahead of the release of The Mirror & the Light, the stunning conclusion to Hilary Mantel’s Wolf Hall Trilogy, revisit two of the most celebrated novels of our time.

Bringing the opulent, brutal Tudor world of Thomas Cromwell and Henry VIII to glittering life, Wolf Hall and Bring Up the Bodies have thrilled and delighted readers, critics and prize judges alike. Both novels won the Man Booker Prize and have sold over five million copies across the globe.

This reading guide takes you through the story so far, introduces you to the main players, explores the key themes and offers reading group questions to discuss.

The stage is set for The Mirror & the Light. After Henry’s marriage to his third queen, Cromwell attains riches, status and unprecedented power. But how long can his luck last – a blacksmith’s son who has risen to be an earl?

Reviews of The World of Wolf Hall: A Reading Guide to Hilary Mantel’s Wolf Hall & Bring Up the Bodies