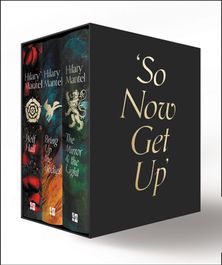 A boxed set of hardback editions of the bestselling and award winning trilogy: Wolf Hall, Bring Up the Bodies and The Mirror & the Light

Hilary Mantel’s Wolf Hall Trilogy – Wolf Hall, Bring Up the Bodies and The Mirror & the Light – traces the life of Thomas Cromwell, the boy from nowhere who climbs to the heights of power in Henry VIII’s Tudor England. It offers a defining portrait of predator and prey, of a ferocious contest between present and past, between royal will and a common man’s vision: of a modern nation making itself through conflict, passion and courage.

‘The greatest English novels of this century’ Observer

‘A masterpiece that will keep yielding its riches’ Guardian