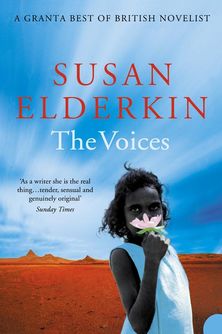 The new novel from Susan Elderkin, one of Granta’s ‘Best of British’ writers and the award-winning author of ‘Sunset Over Chocolate Mountains’.

In the remote, blood-red landscape of the Australian bush, thirteen-year-old Billy Saint hears the haunting song of an Aboriginal girl. The song tugs at something deep, something larger and more powerful than himself. She has sung Billy up – and he is destined to love her for ever.

In an Alice Springs hospital ten years later, recovering from gruesome wounds of mysterious origin, Billy attempts to explain the voices in his head. But only Cecily, the Aboriginal nurse, will listen. What unravels is a mesmerising account of the relationship between a man, the land he loves, and the spirits of the country, struggling to be heard before it is too late.

‘The Voices’ is as seductively beautiful as the timeless landscape in which it is set. A lament for a disappearing culture, told with great delicacy and power, it will continue to haunt its readers long after the final page has turned.