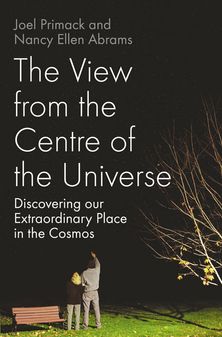 The View From the Centre of the Universe: Discovering Our Extraordinary Place in the Cosmos

A new, scientifically supported understanding of the universe, one that will forever change our personal relationship with the cosmos.

‘Joel Primack is one of the pioneers in the development of modern ideas of cosmic evolution… [this] book presents an original synthesis and distinctive perspective on humanity’s place in the cosmos.’ Martin Rees, Astronmer Royal

Ever since Galileo discovered that Earth is not the centre of the universe, we’ve thought of ‘the universe’ as either an enormous ice-cold vacuum or a setting for science fiction. Now, thanks to startling discoveries in astronomy and physics, we can see that the universe is far more coherent than anyone ever imagined it to be. For the first time in history, we have the necessary tools, theories and thinking to create a science-based cosmology (the study of the origin and structure of the universe) that explains not only how the universe works but what our place in it really is.

This emerging cosmology explains how the universe operates, what the universe is made of, where it may have come from, how it is evolving and why it makes sense that humans are on Earth at all.

Authors Joel Primack and Nancy Abrams, a world-renowned astrophysicist and a science philosopher, explain these astonishing new ideas in ways that will literally change how we view the world, showing us how intellectually thrilling and intuitively meaningful these new concepts are.

Reviews of The View From the Centre of the Universe: Discovering Our Extraordinary Place in the Cosmos