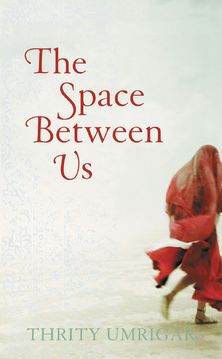 In this beautifully crafted novel about the interlinked lives of two women, Thrity Umrigar explores the complex relationships between the classes in India, rarely addressed in contemporary fiction.

‘Bhima is real. She worked in the house I grew up in, year after year, a shadow flitting around our middle-class home, her thin brown hands cleaning furniture she was not allowed to sit on, cooking food she was not allowed to share at the family dining table, dusting the stereo that mainly played American rock and roll, music that was alien and unfamiliar to her, that only reminded her of her nebulous presence in our home, our world, our lives.’

Set in contemporary Bombay, ‘The Space Between Us’ tells the story of Sera Dubash, an upper-middle-class Parsi housewife and Bhima, the woman who works as a domestic servant in her home. Despite their class differences, the two women are bound by gender and shared life experiences – both had marriages that started out with great romantic love and promise, but ended up as crushing disappointments. Ultimately, Sera Dubash faces a decision that will force her to choose between loyalty to gender and friendship or loyalty to her social position and class.