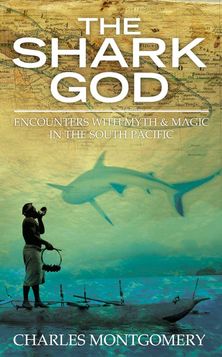 The Shark God: Encounters with Myth and Magic in the South Pacific

A daring journey to confront legend and sorcery in a forgotten corner of the South Pacific.

Deep in the stacks of the Bodleian Library, a young man opens a small packet of sand, buried among crates of notes from the first missionaries to the South Pacific. A memento from the scene of a century-old murder, that envelope and its dusty contents send Charles Montgomery on a remarkable quest to find its island source in the forgotten archipelago of Melanesia.

Retracing a voyage made by his missionary great-grandfather, Montgomery seeks out remote shores where gospel and empire never took hold. He discovers communities still steeped in ‘kastom’ – the indigenous religion of spirits, shamans and sorcery – and he meets a bizarre cast of barefoot prophets, witch doctors and gun-runners. Montgomery is confronted by the ongoing struggles between the old world and the new, as Christianity vies with shark spirits and sorcery for the salvation of souls.

By turns funny and profoundly moving, ‘The Shark God’ blends travelogue with history rich in tales of magic, mischief and violence, and it paints a vivid portrait of a place where the unseen world is every bit as powerful as the physical one. As the author is drawn into the world of miracles, his adventure becomes a quest for the origins of myth and faith, and a metaphor for the transforming power of story.

Reviews of The Shark God: Encounters with Myth and Magic in the South Pacific