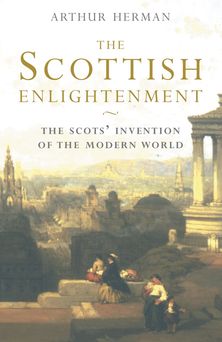 In 1696, on an unseasonably cold August evening, Thomas Aikenhead joked to friends as they hurried through Edinburgh’s wind-blown streets that he would rather be in ‘hell, to warm myself there’. The young theology student would pay for this remark with his life. Yet within one hundred years, the nation that began the 18th-century dominated by the harsh and repressive Scottish Kirk had evolved into Europe’s most literate society, producing an idea of modernity that has shaped much of civilisation as we know it.

Arthur Herman argues that Scotland’s turbulent history, from William Wallace to the Presbyterian Lords of the Covenant, laid the foundations for ‘the Scottish miracle’. Harsh economic reality compelled Scotland into the act of Union with England in 1707, a move considered by many Scots at the time to sound the death-knell for their country and its culture. Within decades, however, a remarkable circle of Scottish thinkers, including David Hume and Adam Smith, gave birth to the key assumptions that underlie modern politics, economics, morals and cultural life. The Scots went on to become the mainstays of the British Empire, infusing this system of exploitation with a spirit of co-operation. Emigration to America brought inspiration for the American Revolution, and ultimately, towering figures such as Alexander Carnegie and Alexander Graham Bell fuelled the rise of America’s capitalist democracy. Written with wit, erudition and clarity, ‘The Scottish Enlightenment’ traces the pervasive influence of a nation and its people to claim their rightful place in the history of the western world.