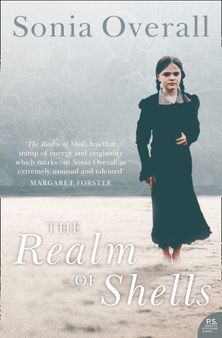 The Margate Shell Grotto really exists: a serpentine corridor decorated in swirling patterns using 50 varieties of shell, and whoever made it created an enigma that has puzzled historians and speliologists for generations. Though it has been suggested that the cave might be Phoenician in origin, the fact that most of the iconography is Egyptian and Eastern suggests a more recent, 19th century origin.

Fanny Newlove is new to Margate, the daughter of Evangelist parents and spurned by the local children as being from the ‘sheers’ – here, anywhere north of London is considered foreign territory. When her brother finds an entrance to a hidden grotto on land their father has been advised to buy, the discovery sets into motion events that will rock this outsider family.

The shells on the walls and the elaborate altar suggest a religious function – so why do the locals speak of buried treasure? And why does dour young writing master Davidson condemn shells as daemonic, upsetting Fanny’s father’s Christian sensibilities by invoking the Kabbalah’s ‘realm of shells’, the basest plane of physical existence and hellish world of hidden devils?

As different people stake their claim to the grotto – including Fanny’s father, whose principles have been outweighed by the lure of tourist money – Fanny will learn that in the adult world, the nature of value is never simple.