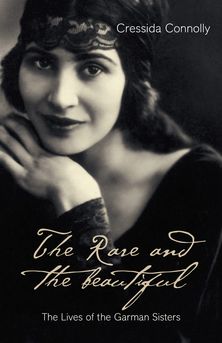 The Rare and the Beautiful: The Lives of the Garmans

A compelling biography of a family, and a portrait of an era.

Each of the seven Garman sisters were strikingly beautiful, artistic and wild. Born around the turn of the nineteenth century, most of the siblings were to become involved in the radical literary and political circles of British life between the First and Second World Wars. Their morals were unconventional: bisexuality, unfaithfulness and illegitimate children were a matter of course. Nevertheless they were high-minded and intensely loyal.

They were the last muses: women who were prepared to sideline their own talent, friendships, material comforts – even their own children – in order to beguile and inspire the men they loved.

Cressida Connolly’s family biography delves into the lives of three of the sisters in intense and revealing detail.

Kathleen Garman, the father’s favourite, ran away to London to study music. There she was spotted by the American sculptor Jacob Epstein, who promptly fell in love with her. She was to remain his muse until his death. She had three children by Epstein, was shot in the shoulder by his first wife and at last became Lady Epstein in 1955.

There was Mary Garman, who came to London with Kathleen and studied art at the Slade. She married poet Roy Campbell, who was to become the scourge of the literary establishment by espousing General Franco’s side during the Spanish Civil War.

And then finally there was Lorna Garman, the youngest and most beautiful of all the family. At sixteen she married the wealthy Ernest Wishart who was a landowner, communist and founder of the socialist publishing house Laurence & Wishart. He spent most of his life turning a blind eye to his wife’s infidelities. Lorna was the love of Laurie Lee’s life and she had a daughter by him. Lucian Freud painted several pictures for her.

Through Cressida Connolly’s skilfull retelling of these remarkable lives, we get an intimate portrait of a golden age of romance, passion and art that is an original, beguiling read.

Reviews of The Rare and the Beautiful: The Lives of the Garmans