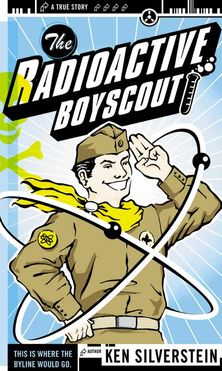 The Radioactive Boyscout: The True Story of a Boy Who Built a Nuclear Reactor in his Shed

David Hahn, a boy scout, wanted to earn his science merit badge. He could have done an experiment with bicarbonate of soda, like most other kids. But he didn’t. He built a nuclear reactor in his shed instead.

David Hahn’s gospel was The Golden Book of Chemistry Experiments. While his friends were learning to play baseball or dreaming of owning their first car, David was in the middle of an increasingly hazardous trail of chemical experiments. Moving on from routine explosions that forced his work from his bedroom to the garden shed, David quickly determined to build a nuclear reactor. For this he had to make a neutron gun, dupe officials at the Nuclear Regulatory Commission to provide him with information and imitate a professor of nuclear physics in order to obtain purified radioactive elements, all of which he did.

David, sporting a gas mask for protection, took to the potting shed with his ever more unstable and dangerous load. His diligence and ultimate success triggered the Federal Radiological Emergency Response Plan: a team of men in moon suits who deconstructed the shed and loaded it and all its contents into steel drums emblazoned with radioactive warning signs. This is a true story. Through it, man’s innocent obsession and fatal engagement with nuclear reactivity is told with surreal wonder.

Reviews of The Radioactive Boyscout: The True Story of a Boy Who Built a Nuclear Reactor in his Shed