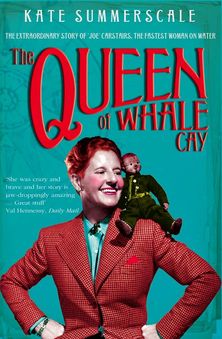 ’Joe’ Carstairs was born in London in 1900, the daughter of a Scottish colonel and an American heiress. Educated in Connecticut, she returned to Europe in 1916 and drove ambulances for the Women’s Legion in France. She deserted her husband at the church door (marriage was a prerequisite of her coming into her $4 million inheritance) and settled in England where she took up racing, established a boat yard at Cowes and won nearly every trophy going. In the 30s she started travelling widely, finally moving to the West Indies where she bought the island of Whale Cay. There she developed the island into a populated community, building everything from roads and schools to lighthouses and churches. Carstairs then suceeded in establishing hegemony over the 500 islanders, controlling not only their sexual morals but also their diet. In 1944 she built a deepwater harbour for the Royal Navy’s use and, without a word to her population, left the island to build warcraft in Florida, where she settled for 40 years, having run a steamship freightline and set up a chain of airports. Kate Summerscale’s brilliant biography brings out of obscurity a woman whose very boldness took her beyond fame and notoriety.