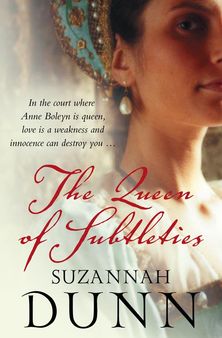 The Queen of Subtleties

Everyone knows the story of Anne Boleyn. Henry VIII divorced his longstanding, long-suffering, older, Spanish wife for a young, black-eyed English beauty, and, in doing so, severed England from Rome and indeed from the rest of the western world. Then, when Henry had what he wanted, he managed a mere three years of marriage before beheading his wife for alleged adultery with several men, among them his own best friend and her own brother. This is the context for Suzannah Dunn’s wonderful new novel, which is about – and told by – two women: Anne Boleyn, king’s mistress and fated queen; and Lucy Cornwallis, the king’s confectioner, an employee of the very highest status, who made the centrepiece of each of the feasts to mark the important occasions in Anne’s ascent. There’s another link between them, though: the lovely Mark Smeaton, wunderkind musician, the innocent on whom, ultimately, Anne’s downfall hinged… Suzannah Dunn has wit, a mastery of dialogue, brilliant characterization, lack of pretence, and good humour. The Queen of Subtleties adds to that mix a wonderfully balanced, strong story and the result is sensational.

Reviews of The Queen of Subtleties