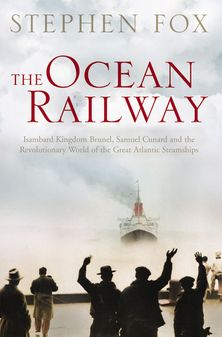 The great transatlantic steamships became emblems of an age, of a Victorian audacity of spirit-cathedrals to man’s harnessing of new technology. Through the innovations and designs of key engineers and shipping magnates – Samuel Cunard, Isambard Kingdom Brunel and Edward Knights Collins – ‘the largest movable objects in human history’ were created. To the wealthy, steamships represented glamorous travel, but to most they offered cheap passage out of Europe to the New World. At their peak, steamships delivered one million new Americans each year, transforming the world’s oceans from barriers into highways. In this fascinating history, Stephen Fox chronicles the tragedies that marked the evolution of the ocean liner, including the 1852 sinking of the ‘Arctic’, with the loss of three hundred and twenty-two lives, and the early 20th-century losses of the ‘Lusitania’ and the ‘Titanic’. Using contemporary records, diaries and writing, he penetrates the experience of transatlantic passage and examines the societies created on the vast floating cities, ‘a kind of third human environment, neither land nor sea but partaking of each, and bridging them in unprecedented ways’. Note that it has not been possible to include the same picture content that appeared in the original print version.