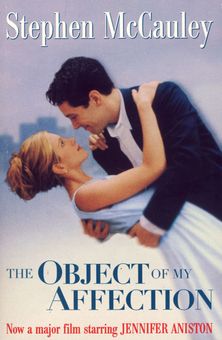 The Object of My Affection

The first novel by the acclaimed writer of The Man of the House, available for the first time in this country.

When twenty six year old George Mullens is kicked out by his lover, Robert, he moves into the terminally disordered apartment of Nina Borowski – and the most complicated friendship of his life. At first their relationship is as easy as their cozy tuna-loaf suppers and ballroom dancing classes at Arthur Murray… while Nina waits for inspiration to write her psychology dissertation and George teaches kindergarten.

Then Nina announces she’s pregnant by her boyfriend, Howard. Howard wants marriage. Nina wants independence. George will do almost anything for a little unqualified affection. But he’s not so sure about his new role as surrogate unwed father.

Reviews of The Object of My Affection