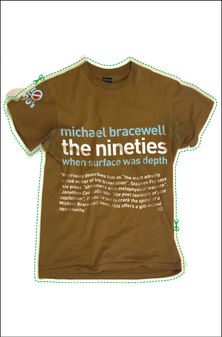 The Nineties: When Surface was Depth

the first clear anatomy of a confused decade, the 1990s – ‘Bracewell, with great verve and style, animates the cultural conversation’, Greil Marcus

‘Michael Bracewell is the most adroitly gifted writer of his generation.’ Morrissey

Michael Bracewell is now clearly established as one of the most subtle, penetrating, amusing and far-sighted of all observers of the contemporary scene in Britain. His writing on culture high and low is coveted by every broadsheet, every stylish glossy monthly magazine and on radio and TV punditry platforms. His book, England Is Mine, about the distinctive Englishness of these islands’ twentieth-century popular culture, earned him incredible reviews and an unchallenged position as the first person any right-minded arts producer/editor turns to when they need a definitive opinion about how English or otherwise some new-fangled cultural phenomenon is.

With this book Bracewell gives us the first consideration of that still-warm, still-bizarre, still-confused and confusing decade. He talks to and talks about a host of representative Nineties figures, some already forgotten, some absolutely emblematic of their times – from Hanson to Alexander McQueen, from Tracey Emin to Ulrika Jonsson, from the Spice Girls to Duran Duran (yes, Duran Duran). Painstakingly, sometimes painfully, he puts all the pieces together and starts to make sense of it all…

Reviews of The Nineties: When Surface was Depth