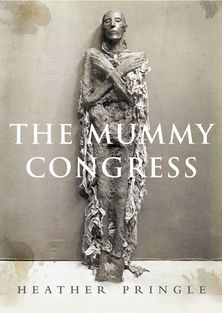 Throughout history, mummies have held a
powerful place in our collective imagination. Packed with extraordinary stories and narrated with great humour and verve, THE MUMMY CONGRESS is a compelling and entertaining journey into the world of the everlasting dead.

When acclaimed science journalist Heather Pringle was dispatched to cover a little-known scientific conference, she found herself in the midst of the most passionate gathering of her working life – dozens of mummy experts battling over the implications of their latest discoveries. Infected with their mania, Pringle spent the next year circling the globe, stopping in to visit the leading scientists so she could see first-hand the breathtaking delicacy and unexpected importance of their work.

In THE MUMMY CONGRESS, she recounts the intriguing findings from her travels, bringing to life the hitherto unknown worlds of the long-dead, and revealing what mummies have to tell us about ourselves. Pringle’s journeys lead her to the lifelike remains of medieval saints entombed in Italy’s grand cathedrals, eerily preserved bog bodies in the Netherlands bearing signs of violent and untimely slaughter, and frozen Inca princesses glimpsed for the first time atop icy mountains.

Ranging from the famous excavation of Tutankhamen to tales of ascetic Japanese monks trying to mummify themselves, and from the Russians’ terrified attempts to embalm the body of Stalin to the fleeting craze for public mummy unwrappings in the nineteenth-century New Orleans, Pringle demonstrates that our own obsessions with the preserved dead have a long and bizarre history.