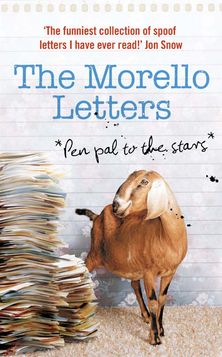 Mr. Morello is a slightly confused, pear-shaped forty-five year old Italian immigrant living with his larger, plump wife Mrs. Morello and three children – Tosti, Amphora and Rizzo – in that most salubrious of London suburbs: Ealing. As a family, they share a curious fondness for all things British and yet by dint of their Italian heritage, struggle to come to terms with some of our more esoteric characteristics.

As such, the ever-inquisitive Mr. Morello, a fastidious and prodigious letter writer, takes it upon himself to correspond with the great institutions and individuals of our fine nation – from Tony Blair, George W Bush, The Lord Chancellor, Richard Branson, and the Archbishop of Canterbury to Gordon Ramsay and The Bank of England, The Guild of Professional English Butlers and British Home Stores to West Bromwich Albion Football Club – in an attempt to have his seemingly endless list of quandaries answered by the experts and at times, in vain attempts to secure employment for his idling children.

These hilarious letters, composed in Mr. Morello’s bizarre English-Italian hybrid vernacular, and plethora of responses from the great and not so good, follow a long and successful tradition of prankish correspondence, as pioneered by Lazlo Toth, Henry Root and more recently Robin Cooper’s ‘Timewaster Letters’. A good-natured exploration of British customs and idiosyncrasies, written with gentle and generous humour, ‘The Morello Letters’ is that rarest of commodities: a humour book that is actually very funny.