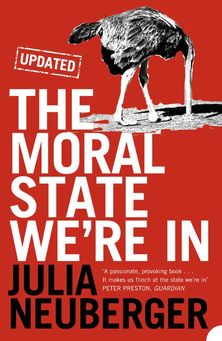 The Moral State We’re In

Just as Will Hutton looked at the political landscape at a turning point in Britain, Rabbi Julia will take the moral temperature of the nation by looking at the ways in which we treat the weakest amongst us. The National Health Service, government pensions and asylum seekers all make daily headlines, and here is a writer with the moral authority and mastery of the necessary information to undertake this timely project. The way we treat the weak and vulnerable members of society has long been an established way to judge how civilised a society is. In this book, Julia looks at the extent to which the elderly are thought a burden, the way we care for the mentally ill, attitudes to asylum seekers and support for ex-offenders, as well as the care of children and the future of society in the UK. Her straight-forward approach to what has elsewhere proven highly esoteric, is here written with ease and fluidity and with a style that is highly approachable for those interested in the state of their nation with purely social, rather than academic, motivations. With her uncomplicated but extremely intelligent and candid take on the issues that make daily headlines, and with Julia’s high media profile, this book is guaranteed to tap into the state of our nation. Includes exciting new sections, reviewing the past year’s events, reception to her book and what – if anything – has changed in the way she sees our nation’s moral predicament.

Reviews of The Moral State We’re In