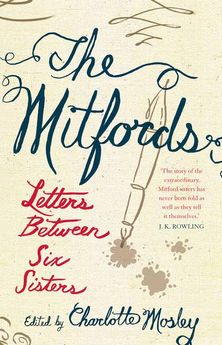 The never-before published letters of the legendary Mitford sisters, alive with wit, affection, tragedy and gossip: a charismatic history of the century’s signal events played out in the lives of a controversial and uniquely gifted family.

Spanning the twentieth century, these magically vivid letters between the legendary Mitford sisters constitute not just a superb social and historical chronicle (what other family counted among its friends Hitler and the Queen, Cecil Beaton and President Kennedy, Evelyn Waugh and Givenchy?); they also give an intimate portrait of the stormy but enduring relationship between six beautiful and gifted women who emerged from the same stock, incarnated the same indomitable spirit, yet carved out starkly different roles and identities for themselves.

Nancy, the scalding wit who transferred her family life into bestselling novels; Pamela, who craved nothing more than a quiet country life; Diana, the fascist jailed with her husband, Oswald Mosley, during WWII; Unity, an attempted suicide, obsessed with Hitler; Jessica, the runaway communist and fighter for social change; and Deborah, the genial socialite who found herself Duchess of Devonshire.

Writing to one another to confide, commiserate, tease, rage and gossip, the sisters wrote above all to amuse. A correspondence of this scope is rare, for it to be penned by six such born storytellers makes it unique.

Editor Charlotte Mosley – Diana Mitford’s daughter-in-law – has had unrestricted access to the vast archive of family letters and photographs, most of which have never been published before.