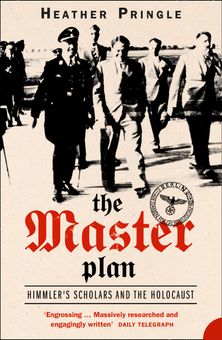 Pre-history, according to Heinrich Himmler, must be re-written. Himmler, the chief of the SS and architect of the Nazi network of death camps, was obsessed with re-writing history. He was convinced that archaeologists had long ignored the great accomplishments of ancient Germanic peoples. Himmler believed that Germany’s ancestors – the tall, blue-eyed, blond-haired Aryans – had evolved not in the savannahs of Africa with the rest of humanity, but in the icy barrens of the Arctic. There, refined and distilled by natural selection in a bitter land, they had become an invincible master race. But some 12,000 years ago, theorized Himmler, a natural cataclysm shook the earth, decimating the scattered Aryan colonies and now, only in select parts of the world – most notably northern Europe – did some true Aryan blood remain.

Himmler’s history was pure fiction, but his conviction was unshakable. In 1935 he founded the ‘Ahnenerbe’ – a research institute to manufacture archaeological evidence for political purposes – appointed himself president, and set about recruiting a bizarre mix of adventurers, mystics, careerists and reputable archaeologists to help write a new chapter in the ancient history of the Aryan race. Expeditions went sent out to Ethiopia, Afghanistan, Greenland and beyond, each backed by the power of the Third Reich to realize this bizarre scientific dream.

‘The Master Plan’ is also an expose of the German scientists and scholars who allowed their research to be used to justify extermination – many of whom resumed their academic positions at war’s end.

Intensely compelling and comprehensively researched, ‘The Master Plan’ is a story of delusion and excess; of scientific and political abuse on a global scale. It has all the energy of an adventure, but also the chilling truth of a terrifying episode in twentieth century history.