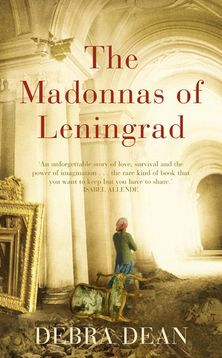 The Madonnas of Leningrad

In this extraordinary first novel by Debra Dean, the siege of Leningrad by German troops in World War II is echoed by the destructive siege against the mind and memory of an elderly Russian woman.

Marina, the woman in question, was a guide at Leningrad’s famous Hermitage Museum. In the late autumn of 1941, as the Luftwaffe roared over and around Leningrad, she and her colleagues were set the task of taking the thousands of priceless paintings, sculptures and objêts d’art out of the grand galleries of the former Tsarist Palace and storing them safely against the German bombardment and seemingly inevitable invasion.

The German assault threatened to destroy a large part of Europe’s artistic history: if Leningrad fell to the Germans, everything that was not destroyed would be looted and given to the Nazis. Marina, whose own parents had disappeared during Stalin’s 1930s’ purges of intellectuals, clings to her hope of becoming an art historian herself through her job at the Hermitage.

The novel shifts between Marina’s experiences at the Hermitage during the siege of Leningrad and her current existence as a very old lady in America whose mind has begun to fray. The shifts are masterfully done: Debra Dean depicts, with subtle skill, the way Marina’s mind, already ravaged by disease, picks up some incident, object or person at the wedding she’s been brought to, and flips back to the dreadful year-and-a-half in Leningrad that has informed her life ever since.

An evocative and deeply moving novel about memory itself.

Reviews of The Madonnas of Leningrad