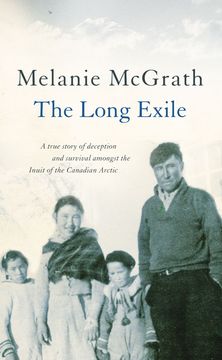 The Long Exile: A true story of deception and survival amongst the Inuit of the Canadian Arctic

A chilling true story of deception and survival set amidst the Inuit communities of the Canadian Arctic.

In 1922 the Irish-American explorer Robert Flaherty made a film about the Canadian Arctic. ‘Nanook of the North ‘starred a mythical Eskimo hunter who lived in an igloo with his family in the peaceful Arctic wilderness. Nanook’s story captured the world’s imagination. The film was shown in Paris, Beijing and New York, and, for a while, Nanook’s face beamed from packets of flour and ice-cream as far away as Australia and Scotland. In Malaysia, Nanook became a word meaning ‘strong man’.

Two years after the release of the film, the man who played Nanook – the Inuit hunter Alakarialak – starved to death on the Arctic ice. By this time, Robert Flaherty had quit the Arctic for good, leaving behind his bastard son, Joseph Flaherty, to grow up Eskimo.

Thirty years later, in 1953, a young and inexperienced Irish-Canadian policeman, Ross Gibson, was asked by the Canadian government to draw up a list of Inuit who were to be experimentally resettled in the uninhabited polar Arctic and left to fend as best they could. Joseph Flaherty and his family were on that list. They were told they were going to an Arctic Eden of spring flowers and polar bears…

Reviews of The Long Exile: A true story of deception and survival amongst the Inuit of the Canadian Arctic