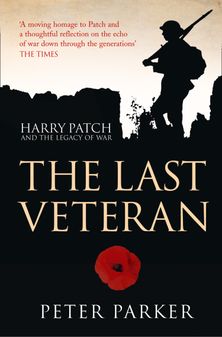 The Last Veteran: Harry Patch and the Legacy of War

This moving and timely book explores the way the First World War has been thought about and commemorated, and how it has affected its own, and later, generations.

On 11 November 1920, huge crowds lined the streets of London for the funeral of the Unknown Warrior. As the coffin was drawn on a gun carriage from the Cenotaph to Westminster Abbey, the King and Ministers of State followed silently behind. The modern world had tilted on its axis, but it had been saved. Armistice Day was born, the acknowledgement of the great sacrifice made by a whole generation of British men and women.

Harry Patch was born in 1898 and was conscripted in 1916. He served with a Lewis gun team at the Battle of Passchendaele and in September 1917 was wounded by a shell that killed three of his comrades. After the war, Patch returned to Somerset to work as a plumber, a job he continued to do until his retirement.

The First World War was fought not by a professional army but by ordinary civilians like Patch, who epitomised Edwardian Britain and the sense, now lost, of what Britain stood for and why it was worth fighting for. The Last Veteran tells Patch’s story, and explores the meaning of the war to those who fought in it and the generations that have followed. Peter Parker’s illuminating and timely book is a moving tribute to a remarkable generation.

Reviews of The Last Veteran: Harry Patch and the Legacy of War