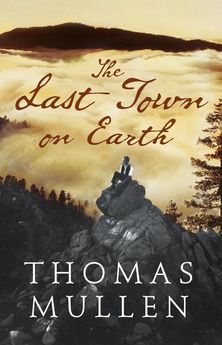 Deep in the evergreen woods of Washington State lies the mill town of Commonwealth, a new community founded on progressive ideals, and a refuge for workers who have fled the labour violence in the surrounding towns. When rumours spread of a mysterious illness that is killing people at an alarming rate, the people of the uninfected Commonwealth vote to block all roads into town and post armed guards to prevent any outsiders from entering.

One day two guards – Philip Worthy, the sixteen-year-old son of the town founder, and his friend Graham Stone, a hardened survivor of vicious strikes – are confronted with a moral dilemma. A starving and apparently ill soldier attempts to enter the town, begging them for food and shelter. Should Worthy and Stone admit him, possibly putting their families at risk? Or should they place their lives above his and let him die in the woods? The choice they make – and the reaction it inspires not only in their town but in the neighbouring town’s league of suspicious patriots – sets into motion a series of events that threaten to tear Commonwealth apart. From the rich threads running through this period of history, Thomas Mullen has created a truly gripping tale, which grows in tension and suspense as the panic and conflict within the town take hold.

A sweeping cinematic novel, with a compelling cast of characters, ‘The Last Town On Earth’ powerfully grapples with the tensions of individual safety and social responsibility, of moral obligation and duty in the face of forces larger than oneself.