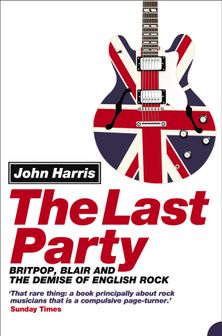 THE DEFINITIVE HISTORY OF BRITPOP – BLUR, OASIS, ELASTICA, SUEDE & TONY BLAIR Beginning in 1994 and closing in the first months of 1998, the UK passed through a cultural moment as distinct and as celebrated as any since the war. Founded on rock music, celebrity, boom-time economics and fleeting political optimism – this was ‘Cool Britannia’. Records sold in their millions, a new celebrity elite emerged and Tony Blair’s Labour Party found itself, at long last, returned to government. Drawing on interviews from all the major bands – including Oasis, Blur, Elastica and Suede – from music journalists, record executives and those close to government, The Last Party charts the rise and fall of the Britpop movement. John Harris was there; and in this gripping new book he argues that the high point of British music’s cultural impact also signalled its effective demise – If rock stars were now friends of the government, then how could they continue to matter? Britpop in numbers: •There were an astonishing 2.6 million ticket applications for the Oasis gig at Knebworth in 1996. 1 in 24 of the British public wanted to see them play. In the end the band played to 250,000 fans across two nights with a guest list that ran to 7,000. •’Definitely, Maybe’, Oasis’s debut album, went straight to No 1, selling 100,000 copies in 4 days and outselling the Three Tenors in second place by a factor of 50% •On its first day in the shops Oasis’s second album, ‘What’s The Story, Morning Glory’, was selling at a rate of 2 copies a minute through HMV’s London stores. • By 1997 Creation Records (which had been founded 12 years earlier with a bank loan of £1,000 by an ex-British Rail Clerk Alan McGee) announced a turnover of £36million thanks almost entirely to one band: Oasis.

Reviews of The Last Party