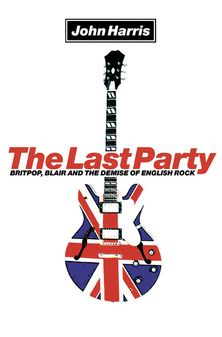 The Last Party: Britpop, Blair and the demise of English rock

The definitive history of the Britpop era – Oasis, Blur, Elastica and Tony Blair.

Beginning in 1994 and closing in the first months of 1998, the UK passed through a cultural moment as distinct and as celebrated as any since the war. Founded on rock music, celebrity, boom-time economics and fleeting political optimism – this was ‘Cool Britannia’. Records sold in their millions, a new celebrity elite emerged and Tony Blair’s Labour Party found itself, at long last, returned to government.

Drawing on interviews from all the major bands – including Oasis, Blur, Elastica and Suede – from music journalists, record executives and those close to government, The Last Party charts the rise and fall of the Britpop movement. John Harris was there; and in this gripping new book he argues that the high point of British music’s cultural impact also signalled its effective demise – If rock stars were now friends of the government, then how could they continue to matter?

•There were an astonishing 2.6 million ticket applications for the Oasis gig at Knebworth in 1996. 1 in 24 of the British public wanted to see them play. In the end the band played to 250,000 fans across two nights with a guest list that ran to 7,000.

•’Definitely, Maybe’, Oasis’s debut album, went straight to No 1, selling 100,000 copies in 4 days and outselling the Three Tenors in second place by a factor of 50%

•On its first day in the shops Oasis’s second album, ‘What’s The Story, Morning Glory’, was selling at a rate of 2 copies a minute through HMV’s London stores.

• By 1997 Creation Records (which had been founded 12 years earlier with a bank loan of £1,000 by an ex-British Rail Clerk Alan McGee) announced a turnover of £36million thanks almost entirely to one band: Oasis.

Reviews of The Last Party: Britpop, Blair and the demise of English rock