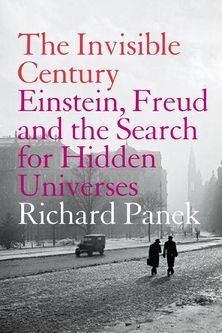 The Invisible Century: Einstein, Freud and the Search for Hidden Universes

From the acclaimed author of ‘Seeing and Believing’. In clear and vivid prose, Richard Panek examines two of history’s greatest thinkers, Einstein and Freud, to offer a fresh portrait of the extraordinary scientific developments of the 20th-century.

At the dawn of the 20th-century there was a widespread assumption in scientific circles that the pursuit of knowledge was nearing its end and that all available evidence had been exhausted. By 1916, however, both Einstein and Freud had exploded this myth by leading exploration into the science of the Invisible and Unconscious, using scientific data that we cannot see. These men were more than just contemporaries – their separate pursuits were in fact complementary. Freud’s science of Psychoanalysis found its cosmological counterpart in the Astronomy of Invisible Light that Einstein pioneered. Together they questioned the inconsistencies of Newton’s ordered cosmos to reveal a different reality, a natural order that was anything but ordered, a cosmos that was volatile and vast – an organism alive in time. Einstein and Freud inspired a fundamental shift in the history of human thought, transforming forever our understanding of the world and our place within it. In accessible and stylish prose, Panek chronicles a scientific revolution that is still in progress today.

Reviews of The Invisible Century: Einstein, Freud and the Search for Hidden Universes