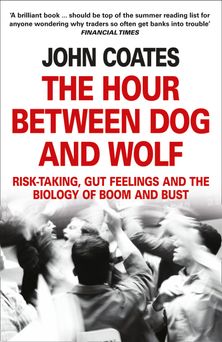 Now shortlisted for the 2012 Financial Times Business Book of the Year Award and the Wellcome Trust Book Prize, The Hour Between Dog and Wolf is a resonant exploration of economic behaviour and its consequences.

Shortlisted for the 2012 Financial Times and Goldman Sachs Business Book of the Year Award and the Wellcome Trust Book Prize, this startling and unconventional book from neuroscientist and former Wall Street trader John Coates shows us the bankers in their natural environment, revealing how their biochemistry has a lasting and significant impact on our economy.

We learn how risk stimulates the most primitive part of the banker’s brain and how making the deals our bank balances depend on provokes an overwhelming fight-or-flight response. Constant swinging between aggression and apprehension impairs their judgment, causing economic upheaval in the wider world. The transformation between each split-second decision is what Coates calls the hour between dog and wolf, and understanding the biology behind bubbles and crashes may be the key to stabilising the markets.