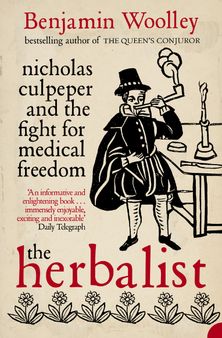 In the mid-17th century, England was visited by the four horsemen of the apocalypse: a civil war which saw levels of slaughter not matched until the Somme, famine in a succession of failed harvests that reduced peasants to ‘anatomies’, epidemics to rival the Black Death in their enormity, and infant mortality rates that left childless even women who had borne eight or nine children. In the midst of these terrible times came Nicholas Culpeper’s ‘Herbal’ – one of the most popular and enduring books ever published. Culpeper was a virtual outcast from birth. Rebelling against a tyrannical grandfather and the prospect of a life in the church, he abandoned his university education after a doomed attempt at elopement. Disinherited, he went to London, where he was to find his vocation in instigating revolution. London’s medical regime was then in the grip of the College of Physicians, a powerful body personified in the ‘immortal’ William Harvey, anatomist, royal physician and discoverer of the circulation of the blood. Working in the underground world of religious sects, secret printing presses and unlicensed apothecary shops, Culpeper challenged this stronghold at the time it was reaching the very pinnacle of its power – and in the process helped spark the revolution that toppled a monarchy. In a spellbinding narrative of impulse, romance and heroism, Benjamin Woolley vividly recreates these momentous struggles and the roots of today’s hopes and fears about the power of medical science, professional institutions and government. ‘The Herbalist’ tells the story of a medical rebel who took on the authorities and paid the price.

Reviews of The Herbalist