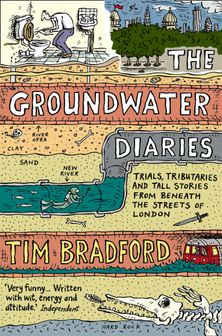 The Groundwater Diaries: Trials, Tributaries and Tall Stories from Beneath the Streets of London (Text Only)

A flight of imagination back to a time when London was green meadows and rolling hills, dotted with babbling brooks. Join Tim Bradford as he explores the lost rivers of London.

Over the last hundred and fifty years, most of the tributaries of the Thames have been buried under concrete and brick. Now Tim Bradford takes us on a series of walks along the routes of these forgotten rivers and shows us the oddities and delights that can be found along the way.

He finds the chi in the Ching, explores the links between London’s football ground and freemasons, rediscovers the unbearable shiteness of being (in South London), enjoys the punk heritage of the Westbourne, and, of course, learns how to special-brew dowse. Here, then, is all of London life, but from a very different point of view.

With a cast that includes the Viking superhero Hammer Smith, a jellied-eel fixated William Morris, a coprophiliac Samuel Johnson, Deep Purple and the Glaswegian deer of Richmond Park, and hundreds of cartoons, drawings and maps, ‘The Groundwater Diaries’ is a vastly entertaining (and sometimes frankly odd) tour through not-so-familiar terrain.

Reviews of The Groundwater Diaries: Trials, Tributaries and Tall Stories from Beneath the Streets of London (Text Only)