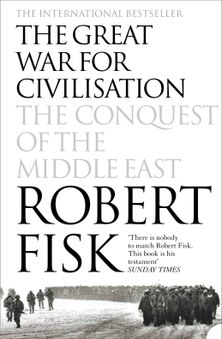 Robert Fisk’s bestselling eyewitness account of the events that have shaped the Middle East is alive with vivid reporting and incisive historical analysis.

The history of the Middle East is an epic story of tragedy, betrayal and world-shaking events. It is a story that Robert Fisk has been reporting for over thirty years. His masterful narrative spans the most volatile regions of the Middle East, chronicling with both rage and compassion the death by deceit of tens of thousands of Muslims, Christians and Jews.

Robert Fisk’s remarkable history is also the tale of a journalist at war – learning of the 9/11 attacks while aboard a passenger jet, reporting from a bombed-out Baghdad, interviewing Osama bin Laden – and of the courage and frustration of a life spent writing the first draft of history.