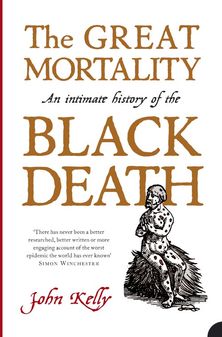 ‘The bodies were sparsely covered that the dogs dragged them forth and devoured them…And believing it to be the end of the world, no one wept for the dead, for all expected to die.’ Agnolo di Turo, Siena, 1348 In just over a thousand days from 1347 to 1351 the ‘Black Death’ travelled across medieval Europe killing thirty per cent of its population. It was a catastrophe that touched the lives of every individual on the continent. The deadly Y. Pestis virus entered Europe in October 1347 by Genoese galley at Messina, Sicily. In the spring of 1348 it was devastating the cities of central Italy, by June 1348 it had reached France and Spain, and by August England. At St Mary’s, Ashwell, Hertfordshire, an anonymous hand carved the following inscription for 1349: ‘Wretched, terrible, destructive year, the remnants of the people alone remain.’ According to the Foster scale, a kind of Richter scale of human disaster, the plague of 1347-51 is the second worst catastrophe in recorded history. Only World War II produced more death, physical damage, and emotional suffering. Defence analysts use it as the measure of thermonuclear war – in geographical extent, abruptness and casualties. In ‘The Great Mortality’ John Kelly retraces the journey of the Black Death using original source material – diary fragments, letters and manuscripts. It is the devastating portrait of a continent gripped by an epidemic, but also a very personal story, narrated by the individuals whose lives were touched by it.

Reviews of The Great Mortality