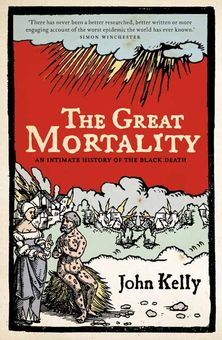 The Great Mortality: An Intimate History of the Black Death

A compelling and harrowing history of the Black Death’s apocalyptic sweep through Europe in the mid-14th century, from its arrival in Sicily to its devastation of medieval Britain.

‘The bodies were sparsely covered that the dogs dragged them forth and devoured them… And believing it to be the end of the world, no one wept for the dead, for all expected to die.’ Agnolo di Turo, Sienna, 1348

In just over a thousand days, from 1347 to 1351, the Black Death swept across medieval Europe killing almost a third of its population – 25 million people. The deadly Y. Pestis virus was brought to the continent aboard Genoese ships fleeing the plague-ridden Crimea, arriving in Sicily in October 1347. By the spring of 1348 it was devastating the cities of central Italy, by June 1348 it had swept in to France and Spain, wiping out entire communities and leaving utter desolation in its wake. By August it had reached England, where among the thousands dead was the King’s own daughter. One graphic testimony can be found at St Mary’s, Ashwell, Hertfordshire, where an anonymous hand carved a harrowing inscription for 1349: ‘Wretched, terrible, destructive year, the remnants of the people alone remain.’

In The Great Mortality, John Kelly retraces the journey of the Black Death, explaining the scientific reasons behind its lightening spread, and why medieval Europe, with its famine, filthy cities and interminable wars, was such a ready host for the virus. Using original source material – diary fragments, letters, manuscripts – Kelly describes the suffering wrought by the plague, and paints a harrowing portrait of a continent gripped by an epidemic of biblical proportions. However, The Great Mortality is more than just a historical account – it also tells a very personal story narrated by the individuals whose lives were touched by it, from soldiers to bishops, peasants to kings.

Reviews of The Great Mortality: An Intimate History of the Black Death