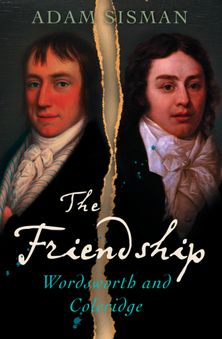 Wordsworth and Coleridge’s passionate intimacy, shared ambition and subsequent estrangement contribute to a tragic tale. But Sisman’s biography of this most remarkable friendship – the first to devote itself wholly to exploring the impact of their relationship on each other – seeks to re-examine the orthodox assumption that these two poets flourished as a result of it. Instead, Sisman argues that it was a meeting that may well have been disastrous for both: for it was Wordsworth’s rejection of Coleridge, and not primarily his opium addiction, that destroyed the latter as a poet, and that Coleridge’s impossible ambitions for Wordsworth pushed the latter towards failure and disappointment.

Underlying the poignancy of the tale is the intriguing subject of the influence one writer can have on another. Sisman seeks to answer fundamental questions about this relationship: why was Wordsworth so reliant on Coleridge, and why was he so easily swayed in the most critical decision of his career? Was it in Coleridge’s nature to play second fiddle? Would it, in fact, have been better for both men if they had never met?