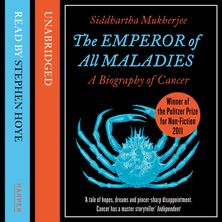 A comprehensive history of cancer – one of the greatest enemies of medical progress – and an insight into its effects and potential cures, by a leading expert on the illness.