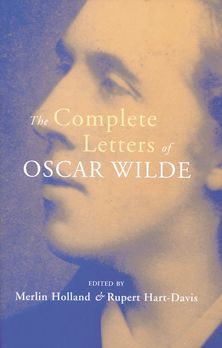 The Complete Letters of Oscar Wilde

This edition marks the centenary of Oscar Wilde’s death, and is the most complete ever to appear. It contains over 1500 of his letters, and anyone unfamiliar with Wilde as a correspondent will find it packed with unexpected delights. This magnificent collection is a major publishing event.

Of all nineteenth-century letter writers Oscar Wilde is, predictably, one of the most sparkling. Wonderfully fluent in style, the letters bear that most familiar of Wildean hallmarks – the lightest of touches for the most serious of subjects. He knew and corresponded with many leading political, literary and artistic figures of the time including William Gladstone, George Curzon, W. B. Yeats, George Bernard Shaw, Frank Harris, Aubrey Beardsley and Max Beerbohm.

Wilde’s letters show him at his informal best. They comment openly on his life and his work from the early years of undergraduate friendship, through his year-long lecture tour in America as a striving and ambitious young ‘Professor of Aesthetics’, to the short period of fame and success in the early 1890s followed by his disgrace and imprisonment. The last and most poignant section covers the five long years between his downfall and his early death in exile at forty-six. Even in adversity his humour does not desert him and he is able to share with his readers that greatest of gifts – the ability to smile at one’s own misfortune.

Reviews of The Complete Letters of Oscar Wilde