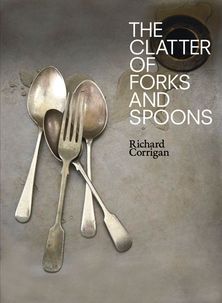 The Clatter of Forks and Spoons

A cookbook with memoirs and opinions by Richard Corrigan, presenter of the BBC’s Full on Food and one of Britain’s leading chefs.

Richard Corrigan is one of Britain’s most respected and outspoken chefs. He has been a key pioneer in the rehabilitation of British and Irish food, a champion of small producers and, above all, the creator of a highly personal repertoire of innovative dishes utilising ingredients that once formed the basis of a vibrant native cuisine but which had been largely ignored recently by fashionable chefs.

Corrigan’s food is based, to a large extent, on Curnonsky’s dictum that ‘everything should taste intensely of itself’. Never a slave to fashion, his approach to food reflects his down-to-earth, countryman’s celebration of endemic foodstuffs. At his restaurant in Soho, Lindsay House, and more recently his fish restaurant, Bentley’s, he has dedicated himself to rediscovering and reinterpreting the traditional foodstuffs of these islands, from beef and oysters to horseradish and herring, gooseberries and samphire.

The Clatter of Forks and Spoons is about joyous eating and the sharing of recipes that all carry the distinctive Corrigan imprint and have been carefully adapted for the home kitchen. It includes an account of the suppliers Richard has come to know and trust, and who are responsible for every item that comes into the kitchen at Lindsay House: farmers, fishermen, gardeners, wine merchants, hunters, foragers and many more. The book is also a memoir of a great chef, telling the story of his move from rural Ireland to the kitchen of one of the world’s leading kitchens, the experiences gathered along the way, and the evolution of his philosophy of food.

Michel Roux once famously commented that if Richard Corrigan were to cook an old boot, he would be happy to eat it. Corrigan’s natural earthiness, deftness in the kitchen, instinctive passion about real food without fripperies and ruthless honesty marks him out as an important voice in British food.

Reviews of The Clatter of Forks and Spoons