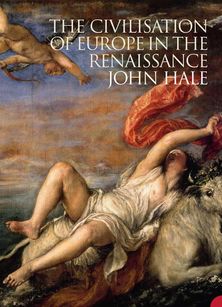 ‘A superb evocation of the Europe of the “long 16th-century”, wonderfully fresh and rich in its copious illustrative detail, full of innumerable delights. The book is the summation of John Hale’s career as a historian, and as the crowning achievement of a master-designer whose richly fabricated works have given so much pleasure.’ John Elliot, Regius Professor of Modern History at Oxford. ‘The Civilisation of Europe in the Renaissance’ is the most ambitious achievement of Britain’s leading Renaissance historian. John Hale has painted on a grand canvas an enthralling portrait of Europe and its civilisation at a moment when ‘Europe’ first became an entity in the minds of its inhabitants. John Hale’s Renaissance has no compartments. With astonishing range and subtlety of learning, he paints a gigantic picture of the age, enlivened by a multiplicity of themes, people and ideas. It contains memorable descriptions of painting, sculpture, poetry, architecture and music, but Hale is not simply concerned with the arts. He examines the dramatic changes during the period in religion, politics, economics and global discoveries. And throughout his book approaches the art of war and the art created for princes from the point of view of their impact on the imaginations, sensibilities and lives of ordinary people.