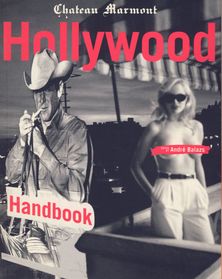 The Chateau Marmont opened in 1929 and has since been patronised by such Hollywood luminaries as Hedy Lamarr, Jean Harlow, Billy Wilder, Howard Hughes, Greta Garbo, John Belushi and Quentin Tarantino. Countless scripts and novels have been written and rendezvous made at the Chateau. It has often been said of the Chateau, ‘If only the walls could talk.’ Well now they have.

The Chateau Marmont’s guide to Hollywood contains original and little-known texts from Hollywood’s great writers and sumptuous photos of Hollywood’s top stars and the great hotspots; as well as quotes, facts, star maps, cameos and charts tell who’s slept with whom, who lives where, who said what, and where it’s all at. From glamour to reality, from film to rock’n’roll, from gossip to insight, from starlets to moguls, from scandals to masterpieces, this book bares all. The Hollywood Handbook is the real Hollywood as few are privileged to see but all want to know.