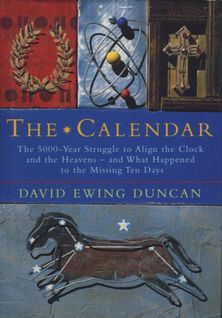 Measuring the daily and yearly cycle of the cosmos has never been entirely straightforward.The year 2000 is alternatively the year 2544 (Buddhist), 6236 (Ancient Egyptian), 5761 (Jewish) or simply the year of the Dragon (Chinese). The story of the creation of the Western calendar is a story of emperors and popes, mathematicians and monks, and the growth of scientific calculation to the point where, bizarrely, our measurement of time by atomic pulses is now more acurate than Time itself: the Earth is an elderly lady and slighly eccentric – she loses half a second a century. Days have been invented (Julius Caesar needed an extra 80 days in 46BC), lost (Pope Gregory XIII ditched ten days in 1582) and moved (because Julius Caesar had thirty-one in his month, Augustus determined that he should have the same, so he pinched one from February). The Calendar links politics and religion, astronomy and mathematics, Cleopatra and Stephen Hawking. And it is published as millions of computer users wonder what will happen when, after 31 December 1999, their dates run out…